The basic equipment used in off-grid system includes solar panels, off-grid inverter, solar charging controller, battery and so on. Here I would like to talk about off grid inverter and system.

Here I would like to talk about the system configuration data reference: we configure the power of off-grid power generation system, mainly depends on the size of your load power, and load to work time, to be clear is that you have to calculate your electricity consumption. There\'s also reserve time, which means that if it rains continuously in a cloudy day, you\'re prepared to allow your load to work for a few days and so on. We can know that the power of the load is 1000W, and the working time is 5 hours, then the consumption of electricity is 5 degrees, if you want to send out 5 degrees of electricity, the board theory 1000-1500W is enough, but here we see his configuration is 2KW, why? Now let me talk to you about some key data. That\'s efficiency: there\'s still a big gap between the actual and theoretical output of solar panels in off-grid systems. That is to say, when the panels are charged, there will be a part of the electricity loss. Generally speaking, the conversion efficiency should be about 70% when the voltage is properly configured. Of course, there will be electricity between any equipment. The problem of loss is only more or less. The overall system efficiency of off-grid should be about 50-60%. The reason is that the board efficiency is 70%, the battery discharge depth is generally about 80%, and the inverter efficiency is generally about 90%. The basic effect is at 50-60%. 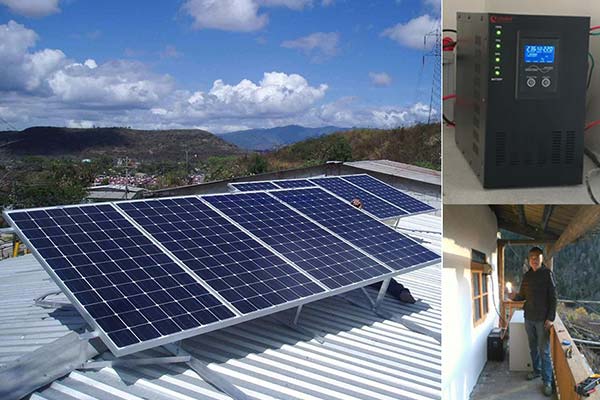 I would like to make a few conventional configurations below.

Make a system that can take home TV, computer and other conventional small electrical appliances: See the system requirements, the first thing we have to consider is the amount of electricity, look at the above appliances to use a few hours, if it is sunny, how long can you send so much electricity. Considering the board, battery and other issues, here I recommend the configuration as follows: 500W solar panels, 50AH battery 2, 1000W off-grid inverter one, 20A controller one. Here is why we need to use two batteries. Because our board is now the most cost-effective 36V 250W polycrystalline board, its voltage is suitable for the charge of 24V battery, if you use a 12V battery, and the use of ordinary PWM charging controller, then you actually charge the maximum power only 12V * 8A = 96W, a 250W board actual use of power are less than 100W. This will cause a lot of waste.

The choice of inverter, the above mentioned series of things, the efficiency of the high or low, and voltage configuration has a very important relationship. Usually, the working power of inverter is less than 80% of the nominal maximum power, that is, 1000W inverter we recommend the maximum load band less than 800W, which can improve the security of inverter.

3000W uses 12V voltage and current nearly 250A, which is theoretically feasible and has not been seen in reality. Think about the thick wire that can pass the 250A current. Friends with a little electronic foundation can try it out on their own.

On battery capacity, the decisive factor is how much do you want to save electricity, you can work through your load power and time to calculate, you have a 1 kw load, for example, to run for four hours, that is four degrees of electricity, a piece of 100 ah battery can save about 1.2 KWH, relatively discharge depth is 80%, then 80% = 1.2 * 0.96 KWH or so, that is a piece of 100 ah battery usually have once electricity, if you want to save electricity four degrees. That\'s four batteries. I said it up there. A 1KW load is recommended with a 12v-24v system, which is not an absolute, if you have four batteries. It could be a combination of 12V, it could be a bunch of 48V, it could be a bunch of twos and twos and that\'s 24V, and that\'s going to be decided by combining your board. It is recommended to use 24V system or 48V system for this power, with high efficiency and good expansibility. The problem of replacing the inverter and controller is not considered in the later upgrade.

The choice of the controller, the type of the controller that\'s mentioned above, usually we use the PWM type, and in the configuration above, I\'m going to talk about it mostly on the basis of this controller, so if you\'re going to use the MPPT controller, the configuration of the voltage in the system above, you can relax a little bit. Let\'s say you fill a 12V battery with a 30V board, which is perfectly fine. And the efficiency is the same as if you were filling a 24V battery with a PWM.