According to the nature of wave string, there are two main categories. One is pure sine wave inverter and the other is square wave inverter.

According to the nature of wave string, there are two main categories.

1. Sinusoidal inverter outputs sinusoidal alternating current as well or better as the grid we use everyday, because it does not have electromagnetic pollution in the grid.

2. Square wave inverter (modified sine wave inverter) outputs poorer quality square wave AC, and its positive maximum to negative maximum is almost simultaneous, thus causing severe instability to the load and the inverter itself. At the same time, its load capacity is poor, only 40 to 60 percent of rated load, and can not carry inductive load. If the load is too large, the third harmonic component contained in the square wave current will increase the capacitive current flowing into the load, which will damage the power filter capacitor of the load. In view of the above shortcomings, a quasi-sinusoidal wave (or modified sinusoidal wave, modified sinusoidal wave, analog sinusoidal wave, etc.) inverter appears. The output waveform of the inverter has a time interval from the positive maximum value to the negative maximum value. The application effect is improved, but the quasi-sinusoidal waveform is still composed of a broken line and belongs to the square wave mode. Continuity is not good. In summary, sinusoidal inverters provide high-quality alternating current, which can drive any kind of load, but the technical requirements and costs are high. Quasi-sinusoidal inverter can meet most of our electricity demand, high efficiency, low noise, moderate price, and thus become the mainstream products in the market. Square wave inverter is fabricated by simple multi-resonator. Its technology belongs to the level of the 1950s and will gradually withdraw from the market. 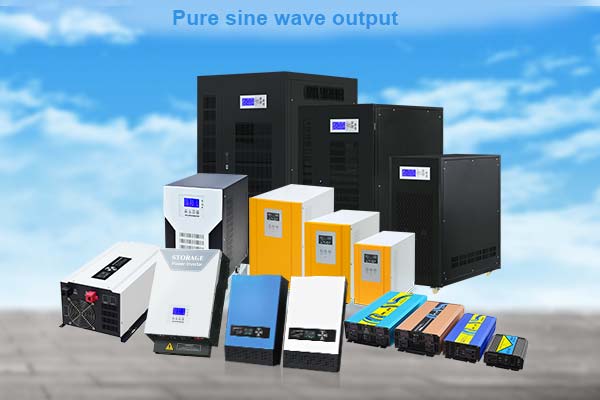 According to the different power sources, the inverter is divided into coal-fired inverter, solar inverter, wind inverter and nuclear inverter. Solar energy is the most widely used. The solar inverters in the world are of high efficiency in Europe and America. The European standard is 97.2%. But the price is expensive. The efficiency of other domestic inverters is below 90%. But the price is much cheaper than imported ones. The power of our inverter can reach 93% and the quality is reliable. In addition to power and waveform, the efficiency of the inverter is also very important. The more efficient the inverter is, the less power is wasted on the inverter, and the more power is used for electrical appliances, especially when you use low-power systems.

According to usage, inverter is divided into independent control inverter and grid connected inverter according to different uses

According to source and nature

1. Source Inverter: It is an inverter that connects the current in the current circuit to the grid on the AC side without directly connecting to the load.

2. Passive Inverter: Inverter that makes the current in the current circuit connect directly to the load (i.e. converting the direct current into an alternating current supply load of a certain frequency or an adjustable frequency) without connecting it with the grid at the AC side.