At present, the common pv inverter can be divided into low-voltage pv inverter and high-voltagepv inverter​ according to the working voltage of solar cell square array.

How is the pv inverter set up to optimize your pv system?

At present, the common pv inverter can be divided into low-voltage pv inverter and high-voltagepv inverter according to the working voltage of solar cell square array. Low voltage grid-connected system is usually composed of 3 ~ 5 photovoltaic cell components in series with dc voltage less than 120V.

The advantage of this method is that each series of photovoltaic cell components are less connected in series and more resistant to solar shadow. The disadvantage is that the dc side current is large and large section dc cable is needed in the design. High voltage grid-connected system is often used in solar cell square array with high rated power. The number of components in series is large and the dc voltage is high. The advantages are high voltage, low current, small wire diameter of the cable used, better matching with the inverter, which makes the conversion efficiency of the inverter higher. At present, large photovoltaic power generation systems mostly use high voltage systems.

At present, the design of solar photovoltaic power generation systems can range from a few kilowatts to several hundred kilowatts capacity, even on mw, as a result of the domestic photovoltaic power generation combined with architectural form is various, equipment selection should be based on the actual situation of the solar cell phalanx installation (such as component specifications, installation towards) optimization design, the solar energy grid-connected photovoltaic (pv) grid inverter in the system set mode is divided into: centralized, master-slave type, distributed and group string type. 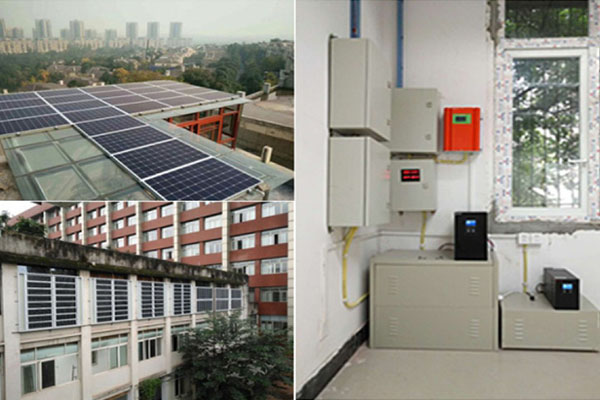 The main advantages of this method are: less photovoltaic grid-connected inverters are used in the overall structure, and the installation and construction are simple. The centralized inverter used is of high power and high efficiency. Generally, the efficiency of the large-scale centralized inverter is about 2% higher than that of the distributed inverter. Less access points and higher output power quality. The main drawback of this method is that if the grid-connected inverter fails, a large area of solar photovoltaic power generation system will be shut down.

Centralized inverter is generally used in large scale photovoltaic power station (> 10 kw) system, a lot of parallel photovoltaic battery string is connected to the same concentration of inverter dc input, the use of the general power three-phase IGBT power modules, the use of smaller power field effect transistor, at the same time by using DSP in order to improve the quality of the output power, making it very close to the sine wave current.

For a large photovoltaic power generation system, the master-slave structure can be adopted. In fact, the master-slave structure is also a kind of centralized structure. The main feature of this structure is the adoption of 2-3 centralized inverters, and the total power is divided equally by several inverters. When the radiation is low, only one inverter works to improve the efficiency of the inverter when the solar cell square array outputs low power. When solar radiation rises and the output power of the solar cell square array increases to more than the capacity of one inverter, another inverter automatically goes into operation.

The main disadvantages of distributed grid-connected power generation are as follows: for large and medium-sized pv power generation systems with hundreds of kilowatts or even megawatt class, multiple grid-connected inverters are needed, and the initial cost of inverters may be relatively high. Because there are many inverters in use and there are more ac side and access points of the inverter and the public power grid, it is necessary to connect the output of the inverter in parallel on the ac side of the photovoltaic power generation system, which has certain influence on the quality of the power grid.

The concept of "master-slave" is introduced in the inter-cluster, which enables the system to connect several photovoltaic battery packs together and make one or more of them work, so as to generate more power when a single stream of electricity cannot make a single inverter work. The latest concept is that several inverters form a "team" of each other to replace the "master-slave" concept, taking system reliability one step further. At present, the untransformer cascade inverter has taken the leading position.

Multiple sets of series inverters take advantage of the advantages of concentrated inverter and group inverter, avoiding its disadvantages, and can be applied to pv power stations with several kilowatts. The output of DC/DC converters is converted into ac power and connected to the grid by a common inverter. Because it is parallel at the ac point, this increases the complexity and maintenance difficulties of the ac side connection.

What needs to be solved is how to connect to the power grid more effectively. The simple way is to connect to the power grid directly through common ac switches, which can reduce the cost and installation of equipment. Another factor related to safety is the need to use an isolated transformer (high or low frequency) or to allow the use of a non-transformer inverter.

Different ratings (such as different rated power, number of components in each group, different manufacturers of components, etc.), photovoltaic components of different sizes or different technologies, clusters of different directions (such as East, South and West), different dip angles or shading, can be connected to a common inverter At the same time, each cluster of clusters operates on their respective maximum power peaks. At the same time, the length of DC cable decreases, the shading effect between groups and the losses caused by the differences between groups are minimized.