Requirements and basic design of inverter for off grid photovoltaic system

1. Requirements for inverter in off grid photovoltaic system

Solar photovoltaic power generation is a new power generation technology which directly converts solar radiation energy into electricity. Solar radiation energy can be converted into electricity through solar cells, and then through energy storage, control and protection, energy conversion and other links, so that it can provide direct or alternating current power to the load according to people\'s needs. The power generated by solar cell array is DC, but most of the electrical equipment is AC power supply, so the inverter is needed to convert DC to AC for load use. 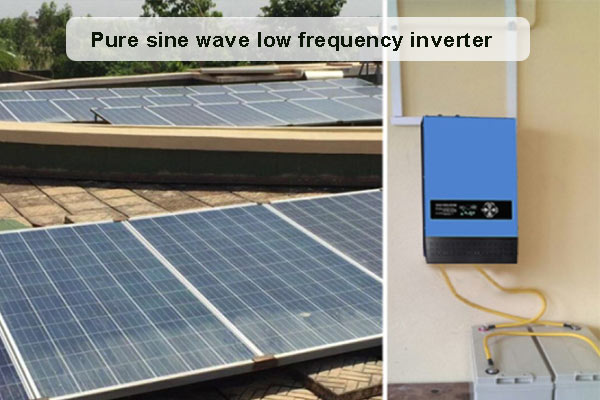 In off-grid photovoltaic power generation system, the efficiency of inverter will directly affect the efficiency of the whole system. Therefore, the control technology of inverter in solar photovoltaic power generation system has important research significance. In the design of inverter, the analog control method is usually used. However, there are many defects in the analog control system, such as the aging and temperature drift effect of components, the sensitivity to electromagnetic interference and the large number of components used. Typical analog PWM inverter control system uses natural sampling method to compare sinusoidal modulation wave with triangular carrier wave to control trigger pulse. However, triangular wave generator circuit is easily disturbed by temperature and device characteristics at high frequency (20kHz), resulting in DC offset in output voltage, increase of harmonic content and dead zone. Adverse effects such as time changes. The development of high-speed digital signal processor (DSP) makes the digital control of inverter possible in solar photovoltaic power generation system. Because most of its instructions can be completed in one instruction cycle, it can achieve more complex and advanced control algorithm, further improve the dynamic and steady-state performance of the output waveform, and simplify the design of the entire system, so that the system has good consistency.

Inverter is a kind of power electronic circuit, which can convert DC power from solar cell array into AC power supply for AC load. It is the key component of the whole solar power system. Off-grid photovoltaic inverter has two basic functions: one is to provide power for DC / AC conversion to AC load, the other is to find the best working point to optimize the efficiency of solar photovoltaic system. For a particular solar radiation, temperature and solar cell type, the solar photovoltaic system has a unique optimal voltage and current, so that the photovoltaic power generation system generates maximum power. Therefore, in the off grid solar photovoltaic system, the following basic requirements are put forward for inverter.

3) the inverter minimized the intermediate links of power transformation to save costs and improve efficiency.

6) The output voltage of the inverter is the same frequency and amplitude as the domestic market voltage, so as to be suitable for the general electrical load.

7) In medium and large capacity off-grid solar photovoltaic power generation system, the output of inverter should be sinusoidal wave with small distortion. In medium and large capacity systems, if square wave power supply is used, the output will contain more harmonic components, and high-order harmonics will generate additional losses. Many off-grid solar photovoltaic power generation systems are loaded with communication or instrumentation equipment, which have higher requirements for power quality. For the inverter of off-grid solar photovoltaic power generation system, high quality output waveform has two requirements: one is high steady-state accuracy, including the THD value is small, the fundamental component relative to the reference waveform has no static error in phase and amplitude; the other is good dynamic performance, that is, under external disturbance, the adjustment is fast, the output waveform changes little.

8) the inverter must have a certain overload capacity, which can generally overload 125% to 150%. When overload is 150%, it should be able to last for 30s; when overload is 125%, it should last longer than 60s. Inverters shall ensure a standard rated sinusoidal output under all load conditions (except overload) and transient conditions.

To improve the efficiency of inverter, we must reduce its loss. Losses in inverters are usually classified into two categories: conduction loss and switching loss. On-loss is due to the device has a certain on-resistance Rds, so when there is a current flow will produce a certain amount of power consumption, on-loss power Pc calculated by the following formula:

In the turn-on and turn-off process of the device, the device not only flows through a larger current, but also withstands a higher voltage, so the device will also have a greater loss, which is called switching loss. Switching losses can be divided into switching losses, turn off losses and capacitor discharge losses.

In order to reduce these losses, it is necessary to implement zero voltage or zero current conversion (ZVC) for power switches, i. e. resonant mode conversion (RMC) structure.

1) Rated voltage. The main function of the photovoltaic inverter is to convert the variable DC voltage from the solar cell (sometimes DC voltage stabilized) into AC voltage to supply AC load. The most commonly used single-phase and three-phase AC voltages are 120V/220V and 208 V/380V, respectively; and for industrial applications, 480V is also common. For the selected inverter topology, the range of the output AC voltage will determine the DC bus voltage and the rated voltage of each semiconductor switch.

2) Capacity. It is another term for the rated power of a photovoltaic inverter, which ranges from 200 W (solar module integration module) to hundreds of kilowatts. The larger the capacity, the larger the volume of the inverter and the higher the price. The cost of PV inverters is measured in dollars / watts. For a proper design, surge, overload, and continuous mode of operation must be taken into account when determining capacity.

3) Efficiency. Each photovoltaic inverter requires high efficiency (output power / input power). For example, the typical efficiency requirement of a kilowatt inverter is more than 95%. Based on the fact that the energy conversion efficiency of solar arrays is relatively low (about 15%), high efficiency inverter is of great significance to obtain the maximum output power with the smallest solar cell capacity.

4) Batteries. Installing a battery pack on the DC side of the inverter acts as an energy buffer, which can suppress the possible fluctuation of DC voltage and store the unused energy of the load.

5) Output power quality. Due to the inherent switching mode characteristics of the inverter, its AC output waveform is not an ideal sine wave, and usually contains a wide range of high frequency harmonics introduced by pulse width modulation (PWM). For many electronic loads, these harmonics are harmful.

6) MPPT efficiency. The output of solar cells will follow a series of characteristic curves under different illumination conditions in their current-voltage curves. Therefore, in order to obtain the maximum power output, the voltage needs to be dynamically adjusted.

7) Communication characteristics. For a kilowatt photovoltaic inverter, it is necessary to construct a communication connection for monitoring and data storage, and a microprocessor (MCU) as a general controller is suitable for this function.

8) Safety. There are two meanings: one is to ensure the safe and stable operation of the photovoltaic power generation system; the other is to ensure that the staff should have no safety risks in operation, maintenance and maintenance.

At present, most photovoltaic inverters can only optimize the overall efficiency of the solar array from a certain optimal position. This optimization method seriously restricts the efficiency of solar power generation system. If the photovoltaic system operates at a non-optimal voltage and current level, the efficiency of the system is very low, and the opportunity to collect solar energy is wasted. In photovoltaic power generation system, solar cells are formed by parallel connection of multiple series groups. Like festive lighting, if a solar cell in series fails, the entire solar cell pack will fail. In addition, when partial shadow is used to shade solar cells, this happens.

The Bypass diode located in the front of the photovoltaic inverter is not part of the inverter strictly, but as a part of the solar power generation equipment, it is also very important for the operation of the inverter and the reliability of the whole system. The new Sen Mei needle has launched two new products: LX2400 and SFDS1045. The LX2400 incorporates the latest Cool RUNTM technology, requiring no radiator and a temperature rise of less than 10 C at 10A current. Reliability design with 30-year stable operation as the objective ensures the leakage current below 100 mu A, steady-state current capacity of 20A and two-way lightning resistance. The biggest feature is the lowest temperature rise in the industry. SFDS 1045 is a new generation of Schottky diodes, is the industry\'s thinnest bypass diode so far, only 0.74 mm thick and placed under the glass package, especially suitable for direct application to solar cell arrays. In addition, its unique flexible copper pin has satellite application level reliability.