Off-grid photovoltaic power plants store solar power in storage batteries and convert them into household electricity through inverters. The grid-connected power station is connected to the mains, and there is no electric energy storage device. 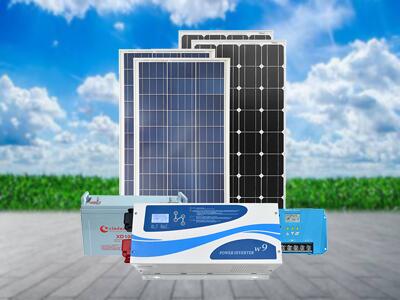 In the photovoltaic off-grid system and photovoltaic grid-connected system, we compare the following aspects:

In the off-grid system, batteries and solar charge and discharge controllers need to be adopted, which increases the cost.

We tested the same component of the battery in both off-grid and grid-connected systems, and the tests showed that the system would be relatively efficient.

2. There are many off-grid system components, and the fault points increase correspondingly, which reduces the reliability, and the performance of the battery will decrease with the use.

3. Although mains complementary system can improve the system or the reliability of the fault cases in rainy weather, but the switch\'s impact on the load and the device itself is also the important cause of system failure;

4. Grid pv system without any energy storage and switching unit, power is by the system automatically allocate, and equipment for automatic control work in the best condition to run, stable performance and high reliability.

In order to monitor the state and efficiency of the system, a DC meter is connected to the DC output end of the solar cell array and an AC meter is connected to the output end of the inverter. The monitoring software is compiled to monitor the DC and AC tables, because the frequency of the ammeter is relatively high and is not well achieved in the software writing. So high frequency, meter box display system accuracy is also different, display data will be different from the data displayed by the meter, so the monitoring and display software is a gross estimation. The grid-connected inverter integrates the rs-485 and Ethernet communication interfaces, and transfers data to the computer through the 485/232 converter for easy viewing and operation. Monitoring system to monitor and display of the following parameters: the solar cell array voltage and current, ac output voltage and current, the current power, the power generation, the cumulative power generation, solar radiation, solar panels power parameters such as temperature, ambient temperature, and show the data such as carbon dioxide and fault state.

Compared with conventional energy, solar power has the following advantages:

2. Solar power generation is a static operation, without moving parts, it has a long life and requires little or no maintenance;

But relatively grid pv system, off-grid photovoltaic systems need to use to produce electricity for storage battery, and extensive use of raw materials - metal lead battery, and battery life is relatively short, waste will cause serious pollution to environment.