First of all, we need to know the difference between single-phase and three-phase electricity. From the perspective of waveform, the difference is as follows: 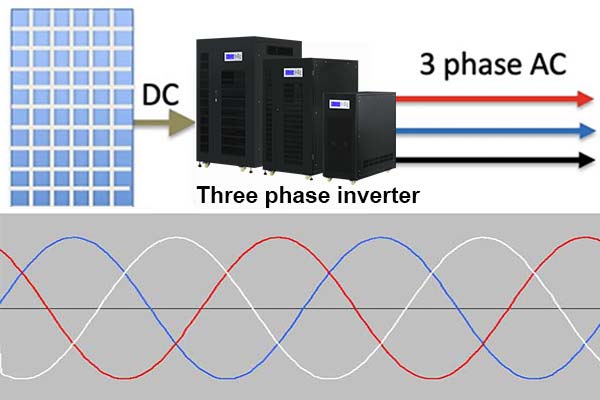 2) From the security perspective, three-phase power can provide a better voltage grade, relatively safe, assuming that the voltage is 380 v, if is single phase is 380 v is a thread, a thread is 0 v, but if is three phase, two wire is 220 v, reduced voltage grade, in insulation, wire diameter and a series of security issues have advantage.

3) from the perspective of physics, single-phase instantaneous power curve is undulating and not stable enough, while the instantaneous power of three-phase motor is a straight line, equivalent to average power and relatively stable. Furthermore, since the three phase potentials are 123 degrees different from each other in a single phase, 4 can transmit three times as much single-phase energy as it does for this reason.

From the comparison of the above tables, it can be seen that the three-phase off grid power generation system is widely used, the inverter power density is high, the output power quality is good, the three-phase balance has little impact on the grid, the grid burden is light, the power utilization rate is high, it will be more and more applied to the power generation system in various occasions, for this reason, Xindun as a gold supplier, introduced a new series of low-power three-phase photovoltaic grid-connected inverter, for the household grid-connected system provides a new, intelligent new concept solutions.