HOW IS AN OFF GRID SOLAR INVERTER DIFFERENT FROM A GRID-TIED INVERTER?

A grid-tied inverter takes DC power from solar panels, turns it into AC, and sends it into the grid for credit.

Grid-tied inverters are simpler and easier to wire since there are usually only two main components—the inverter itself and your solar panels. (Some grid-tied systems are starting to incorporate energy storage, but most of them have no batteries.)

But an off-grid inverter needs a battery bank to function.

As you can imagine, off-grid systems are more complicated, thanks to additional components like the charge controller, battery monitor, and additional AC and DC circuit breakers. All of these things tend to make off-grid systems more difficult to wire and install.

It can also be a challenge to buy off-grid equipment because there are a lot of associated accessories: remote controls, battery monitor, breakers and enclosures, surge suppressors, and so on.

Picking the right parts can be confusing enough—but there’s no more critical decision than buying the right inverter.


HOW TO CHOOSE AN OFF GRID SOLAR INVERTER

The first thing to think about is how much power you need. 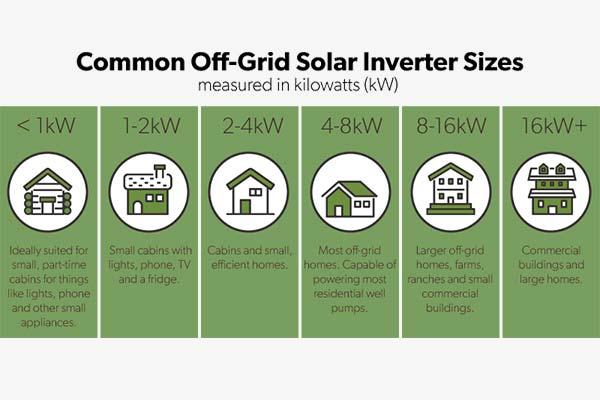 Fortunately, sizing off-grid inverters is straightforward if you know what appliances you’re going to use.

Don’t forget to consider the voltage—although most appliances run on 120Vac, some appliances, such as well pumps, require 240Vac.

What’s the most popular size we sell? 4kW followed by 8kW. Different models and brands are available in various sizes and most of them can be stacked together for higher power output.

Need a quick way to tell the difference? Look at your inverter’s total harmonic distortion (THD) rating. THD is an indicator of power quality output and will be listed on the spec sheet of any decent inverter.

Look at the Technical Specs

Here are some other technical specs to consider:

Efficiency. This is a measure of how much power from the batteries your inverter delivers to your home when it’s operating in perfect conditions. A good peak efficiency rating is around 94% to 96%.

Self-consumption, or no-load current draw. How much power will your inverter consume just sitting there? Obviously you want this to be as low as possible.

Surge capacity. How much short-term overload can the inverter handle before it “trips?” Some appliances, like pumps or fridges, need as much as 2x–3x their running power to start up.

Temperature range. Inverters are sensitive to extreme heat. Pay careful attention to the temperature range if you plan on installing your system in your garage or anywhere it could be exposed to temperature extremes.

Warranty. Warranties start at 1 year and typically range from 3-5 years.

You can normally find information on all these features on the product spec sheets. Check with your solar tech for help comparing and picking the right inverter.